In 2010, after a harrowing health experience and the end of a relationship, I created a bucket list.

Even writing the words, I trembled. "Learn how to ride a motorcycle."

Somehow, and despite doctors prophesying that I would live a very disabled life, I regained my health and I learned to ride a motorcycle.
Going to hell and back made me a new woman. A woman who will not settle for less than an exciting, challenging life.

But I can't take all the credit. Because really, it started with Simon.

The Man Who Inspired Me

It was love at first sight. The joy Simon brought me was immediate. Sexy, funny, smart, kind. I recognized all these qualities in our first conversation. If I am honest with myself, there was no turning back the moment I saw him.

Long story short, Simon quit drinking and decided to do something he had always quietly dreamed about. Become a motorcycle rider.

For both of us, there was no question what kind of bike he would ride. Obviously, a Harley Davidson. (At the time, I as not aware that Indian Motorcycle had made a comeback through Polaris.)

One day, early in our planning and fantasizing, we decided to stop in at Barnes Harley Davidson in Langley to see what was available. As we entered, we were offered popcorn and coffee.

Immediately, we were approached by a friendly sales guy. We told him we were checking out prices, and understanding that cost was a concern, he immediately directed us to the used Harley's outside. One in particular captured Simon's attention.

The bike had been customized by its previous owner. It was cool as f*ck!

Our skilled salesman assured us that this bike would be snatched up quickly. There was another fellow who had looked at it earlier that day and he'd said he was coming back.

The price was right. It had everything Simon wanted.

We spent the next few months riding as often as possible. I absolutely loved being a passenger. We'd go to pubs and I would drink, and Simon would eat. Life was perfect.

As a child, I told my father I would ride a motorcycle when I grew up.

He rode a 1979 Harley Davidson Shovelhead and for us kids, he bought a little MM5A Indian "Mini Mini." It looked just like the one in this photo.

He told me to do squats and lunges to get "motorcycle muscles."

He also taught me how to do handstand push-ups against a wall and how to win in an arm wrestle.

When I was 38, I almost died. After life-saving, emergency surgery, I spent years in and out of hospital. It was my second home. For five years, I watched others live their lives while I stood (or rather, reclined) on the sidelines.

Now, I watched Simon stop drinking alcohol despite that I drank every evening in front of him.

I was, in a word, inspired.

Simon's achievement in a matter of months inspired me. I had one life to live and I knew better than most that it could be stolen from me in an instant.

I maxed my credit card out and enrolled in the training at Pacific Riding School. I got my learner's license.

And I bought a motorcycle!

First we checked out all the Harley Davidson dealerships. Mountainview in Chilliwack gave us incredible service.

I almost bought a Harley Sportster 883 from them.

Then Simon told me there was an Indian Motorcycle dealership in Langley. Interesting!

Our next stop was Indian Motorcycle of Langley based out of Sea to Sky Motorsports.


WHY I BOUGHT AN INDIAN MOTORCYCLE

Like the day we bought Simon's Harley, we didn't plan to buy a motorcycle that day. But the planets aligned and it couldn't be helped.

Trent, our salesman (who later became a dear friend), led us to the 2017 Scout Sixty. I sat on it and immediately noticed it felt lighter than the Sportster. In reality, it was a little heavier, but it had a lower center of gravity. 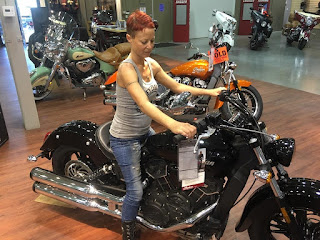 I admit nostalgia played a role in my decision. And then there was that promotion they had going ...0% financing.

We went outside and started one up. I was confused. What was that sound? I think I made a face because Trent then informed me I could trade out the stock pipes for Crushers. In my experience, bikes were loud and fierce. I expected a bike to rumble.

The bike will rumble with Crushers, he said.

I qualified for the financing, traded out the stock pipes for crushers, and purchased that beautiful motorcycle. 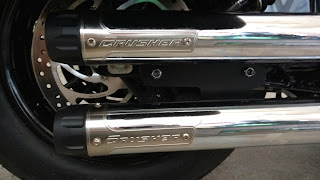 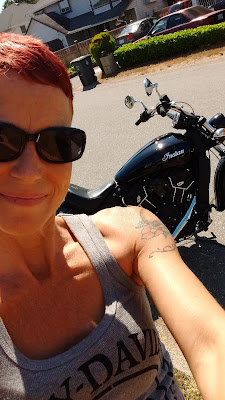 I got mini ape handlebars, a reduced reach seat, and a rack for my back fender. I already had awesome Harley Davidson boots from Barnes with a good heel. After adding risers inside my boots to make me slightly taller, I could put both feet flat on the ground.

I named my beautiful boy "Sweet Medicine." And he is. But first I had to learn how to ride.

Most things in life have come easy to me. Not my health, certainly. But I was an "A" student without much effort. I picked up on sports easily. Gymnastics. Dance. Writing. I walked at 8 months and talked sooner.

I thought riding a motorcycle would be easy.

That's not to say I wasn't nervous. But I was confident. So, I was very surprised and emotional when it did not come easy after all.

I am 5 feet tall, 96 lbs. Two years before this, I was crippled by arthritis. Now, although I was recovering my health, I was still gaining back my strength. Perhaps that played a role in my struggle.

Whatever the contributing factors, I did not graduate from the course with my MSA at the end of the week with my classmates. My instructors suggested I come back for an extra day of practice another week before taking my MSA test and venturing out for the road rides.

I cried. Poor  Kramer! He was very kind and reassuring, but I felt like an utter failure. Kramer calls women like me "powerhouse women." We don't cope well with wounded pride. Clearly.

Fortunately, I am blessed. One of the most caring, compassionate angels on the planet, who also is a woman Harley rider; eased my fears and helped me get over my shame by sharing her own stories of mishap along the way, learning to ride.

Later, she also helped me through fearing to leave the parking lot on Sweet Medicine and dropping my bike. I simply adore this woman. (You know who you are. xoxoxo)

Needless to say, I took a few weeks off for a family vacation and Simon took me to practice on Sweet Medicine in a high school parking lot a few times.

My new motorcycle intimidated me. It seemed much bigger than the Rebel I learned on at the school.


Then I paid for the extra day of training.


Kramer was right. I needed just one more day. It made a world of difference. Nervously, I took the MSA test doing the U-turn "the pussy way," as my instructor called it - in other words, no throttle.

But I passed. And I was allowed to participate in the road ride with this new group of students. WHAT A RUSH!

Those two road rides gave me the courage to finally take Sweet Medicine out on the road. What followed was two months of one of the greatest love affairs of my life.

While natural treatments were healing my body, Sweet Medicine was healing my soul. 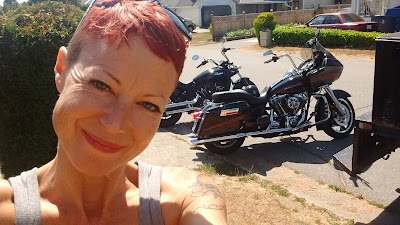 That was last season. Now, winter is slowly heading towards a close. My second riding season is coming. Sweet Medicine is getting a new windshield. I bought some warm gloves.

I cannot lie. I'm nervous about getting back on and riding after having a few months off. But Sweet Medicine doesn't seem quite as intimidating anymore. And I am stronger than I was last year.

I am a motorcycle rider. I did it. Somehow, the fact that it wasn't easy has made it sweeter.