Why I Stopped Vaccinating My Children 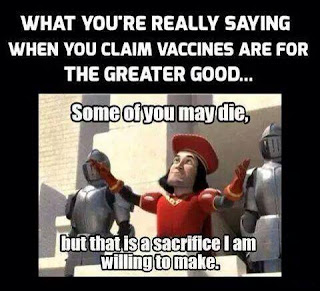 Vaccines can and do injure and kill people.


How I Learned About Adverse Reactions

In 2008, I suffered a disabling adverse reaction to the Twinrix (Hep A/B) vaccine. I was 34 years old and about to marry the father of my children. There were signs of a reaction after the first dose but my doctor did not recognize them.

When I asked, he said the vaccine could not have caused my health issues, which were mainly gastrointestinal and neurological in nature. Either he hadn't been educated about vaccine injuries and hadn't read the product insert which listed all my symptoms as potential adverse reactions or he was lying. Either way, I believed him.

I received the second Twinrix shot four days before my wedding. I spent those days in constant anxiety. I awoke each morning with my body vibrating. I excused it as wedding jitters, despite that I'd been with my partner for seven years and wasn't nervous about marrying him.

I felt ill throughout my wedding day. My gastrointestinal and neurological distress increased, so my honeymoon was spent resting rather than hiking and zip-lining, like we'd intended.

Two days after we returned home from our honeymoon, I became too ill at work. I was so dizzy, I couldn't drive myself home.

Every day I thought a doctor would figure out what was wrong with me and help me be well again. Instead I was told it was repressed childhood trauma causing my symptoms...

I spent the next 1.5 years disabled by dizziness, tunnel vision, weakness, and nausea, among other things. I spent that time going from doctor to doctor, from specialist to specialist. I was on a two year waiting list to see a neurologist. Standard testing didn't indicate what was causing my disease. I learned that when doctors don't know what is wrong with you, they blame you and tell you it's all in your head.

I think that most of all was what traumatized me...not being believed. I had gone from being an energetic, hard-working, motivated, person who constantly smiled and loved to dance to being depressed, disabled, and constantly dizzy. How could anyone think I was faking it? I would have done anything to get my health back.

I was able to recover from many of the debilitating symptoms that plagued me during the first 1.5 years by changing my diet. However, I continued to have gastrointestinal problems.

I was eventually diagnosed with Crohn's Disease when I almost died from a sudden, unexplained bowel perforation. I now live with multiple autoimmune disorders, including food allergies and disabling arthritis, as well as frequent surgery complications.

A shocking discovery...doctors know nothing about vaccines...

About two years after the onset of my illness, I was expecting my third child. Because I had lost faith in the medical system, I began to research vaccines in preparation for my newborn. My two older children were up-to-date. My middle child was approaching his 5-year-old shots.

My research led to an epiphany. All of the symptoms I suffered following the Twinrix Vaccine were listed as adverse events in vaccine inserts. I had indeed been vaccine-injured, as my husband and I had originally suspected.

I ordered my medical records to be sure, and my suspicion was confirmed. I had been in excellent health prior to the vaccinations, and all had gone downhill immediately after receiving them.

I was not informed about the risks of vaccines. Despite the fact that my own doctor administered them, and their product inserts listed gastrointestinal and neurological adverse events as possible side effects, he did not recognize or acknowledge the possibility of vaccine injury.

If he had, he would have certainly exercised caution in giving me the second shot. My life might have turned out very different. If my doctor would have recognized the signs, I might have had a much milder injury. Instead, I got another shot. And my health as I knew it...disappeared. 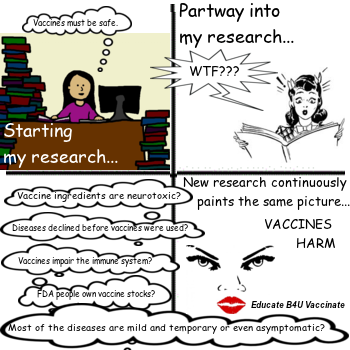 Fearing that my vaccine experience could be genetic and my children might also be injured if I continued vaccinating them, I continued my research.

I thought I would pick and choose vaccines and schedule them for later than what was recommended.

After hundreds of hours of research into the diseases we vaccinate against, vaccine risks and potential reactions, the corruption in the medical establishment, and upon realizing that the science proving vaccines are safe and effective doesn't exist; I chose with confidence to stop vaccinating my older children altogether and to refuse vaccines for my unborn child.

The result has been nothing short of startling. My older children were plagued by ear infections, asthma, eczema, food intolerances, learning disorders, night terrors, and frequent colds and flus as infants and toddlers. The longer they go without vaccines, the healthier they have become.

My youngest is five now and she has never had any of the health issues I listed above. She has never had an ear infection. No eczema, no night terrors, no troubles learning. She bounces back from colds and flus when she gets them, which is rare.


The New "Normal" is Sick Kids

Seeing the difference in my children's health has not surprised me considering that vaccines are designed to trigger and disrupt the immune system. Clearly, my youngest daughter has a stronger immune system because I avoided vaccines.

What is surprising is how big the difference in their health is. What I used to think were “normal” childhood issues (frequent viral illnesses, frequent ear infections, etc), I realize now they are only normal because vaccines are normal. 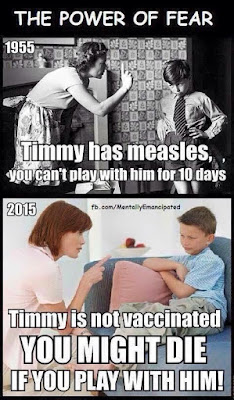 I am confident enough in my decision to stop vaccinating that I would avoid them at all costs.

To me, vaccinating is like playing Russian roulette. Pull the trigger and see what happens. But vaccines are worse because you may not see the damage they cause for months or years to come.

Anyone who says that vaccines are safe and that they prevent disease does not understand the nature of vaccines.

Let them be the guinea pigs. I challenge them to get all the vaccines recommended in the childhood schedule at the same rate as we give them to infants and children. See how they feel after. How many will still advocate for mandated vaccines? I guarantee none of you will.

Vaccines are created to cause disease and elicit an immune response. Your health will never be the same again. You can look forward to a lifetime of compromised immunity. That is, if you survive. Most adults today do not live a healthy enough life to withstand the assault of multiple vaccinations.

I am tired of people in power making decisions about vaccines without having ever done the research themselves. Usually, it is not until a person experiences a vaccine injury in his or her family that the research is done. So, essentially, people with no education and no experience are mandating vaccines. This is a horrible injustice. Passing laws in ignorance should itself be illegal.

Please. Do your kids a favour. Educate before you vaccinate.

I wish we could trust doctors to make all our decisions for us. But we really can't. They are not experts on this issue. In fact, they know very little about vaccines. Most doctors are doing the same thing as us...believing what we've been told without doing the research ourselves.


Don't Wait Until It Happens To You

Health is our greatest wealth. We tend to take it for granted until it's gone.

Learn from my mistake. Read studies from both sides...THEN make a decision. At this link, I am happy to share studies and sources with you.

You can always vaccinate later. But you can never undo a vaccine injury. ‪#‎hearthiswell‬ ‪#‎nomandates‬ ‪#‎fuckvaccines‬


My story and reading hundreds of other people's stories led me to be inspired to make this video with my daughter, in honour and memory of vaccine injured and dead. <3

Please share your story and comments below. XO
Posted by TR at 11:05 AM