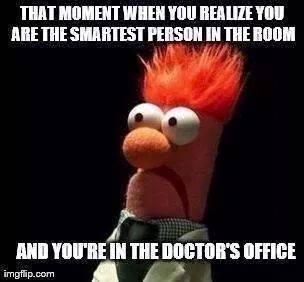 TRUE STORY...I attended an insurance company-arranged appointment with Dr. DrugPusher today and although I understood the appointment to be for assessment rather than treatment, the doctor spent an inordinate amount of time trying to convince me to go on immune suppressant drugs for Crohn's and Arthritis.

Almost immediately after entering his office, he asked why I have chosen not to take pharmaceuticals for my conditions. Throughout the course of the appointment I felt obliged to explain my reasons, as listed below:

I've researched it thoroughly and considered it seriously but..


-I am sensitive to chemicals and tend to suffer side effects from pharmaceuticals; I don't want to take the risk of being unable to care for my three children. (I am a single mom.)

-I've had good results with healing naturally through diet, detox, and alternative treatments. (I am able to function enough every day, even on my bad days, to care for my children.)

-I do not suffer from any Crohn's symptoms and haven't for well over a year now. (Thanks to diet changes and supplements.)

-Risk for some cancers rises with taking these drugs. (He said “Only skin cancer and we just recommend to get anything that looks funny taken right off [while you're on immune suppressant drugs].")

-They cost over $300 a month and you're supposed to take them for the rest of your life. (At this point, he tells me that the pharmaceutical companies have subsidies available because it's in their best interests to get you on their drugs. Seriously, he admitted this.)

-You have to try one drug for several months to see if the side effects go away and if the drug works for your conditions. If it doesn't work for you, then you try another drug which is equally intense. Basically, what I'm saying is, they expect side effects.

-I would have to take more drugs to manage the side effects of the drug I was originally put on.

-Every person I've talked to who takes immune suppressant drugs is in and out of the hospital, plus they have side effects from the drug to deal with.

-After awhile, the drugs don't work anymore, so I would need to go off one and go on another. Or, worse still, I would have to go on another drug in conjunction with the one I'm already on.

-There's no guarantee that any of these drugs will work. (He suggests that people also do complementary treatments such as the things I am already doing around diet and supplementation.)

I was able to bring up all the above points during our 1.25 hr office visit because Dr. DrugPusher kept bringing up the topic over and over again. He even went so far as to call “people like” me “difficult patients.”

He then said "We [doctors] don't even see people like you in our offices anymore because of the success of these drugs." (He was reffering to the swollen joints in my hands today.)


I have to admit that at that point, I somewhat lost my cool. However, like him, I was exceedingly polite as I pointed out that I don't go to the doctor for these issues anymore either and the only reason he was seeing me was because of my car accident. I stated that furthermore, I don't want to waste my time going to doctors who have nothing to offer me except drugs and I referred to them as "the medical mafia trying to push pharmaceutical drugs on people."